As I'm sure you're aware, I've spent the last month travelling in Brazil and Ecuador. This blog post is a bit different from my usual content, but I wanted to share my experiences with you! I'm going to write this in 3 parts, as I think it might be a bit of a lengthy read otherwise. I left in February, feeling quite daunted by what I had decided to do. I had never travelled alone before so had absolutely no idea what to expect, and started to wonder whether I had done the right thing. I've heard stories about how travelling alone is so freeing, others about how it's terrifying, and I was clueless as to how my mind would respond. I said my emotional goodbye's to my family and got on the train at Totnes station. I finally arrived in Rio de Janeiro at 9pm local time, and my feet didn't touch the ground again until I got home!

My first stop was the city of Rio, ready to celebrate the world-famous Carnaval. Well, celebrate I did! Once I checked in to my hotel I was immediately met by group leader Jorge, with really comforting enthusiasm. He told me to drop off my stuff, get changed, there's a face-painter waiting and we're going out at 11pm. I almost said no thank you, I was exhausted, but there's no time like the present to get stuck in. I was a bit nervous heading downstairs, and I met our face painter. I can't remember his name, but I found out later that he's Argentinian and a performance oil painter, just face painting for Carnaval, and you could tell from his painting styles.

I loved his eccentricity, and I've been invited back to join him next year! 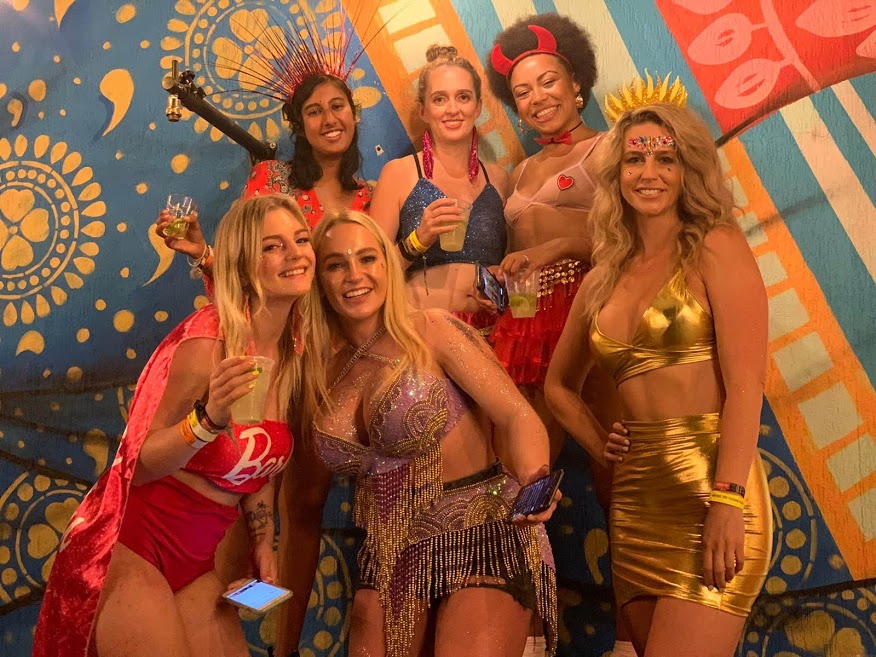 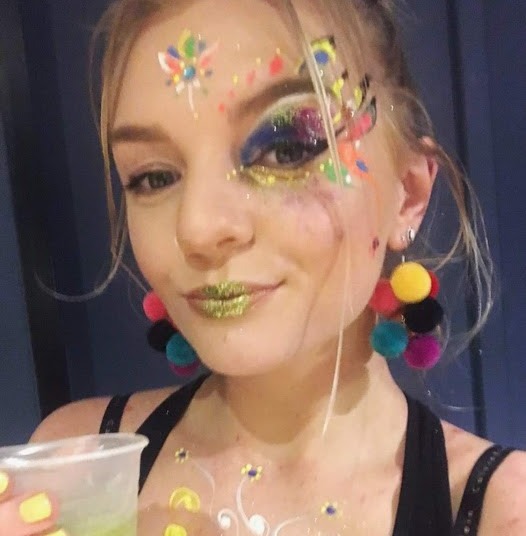 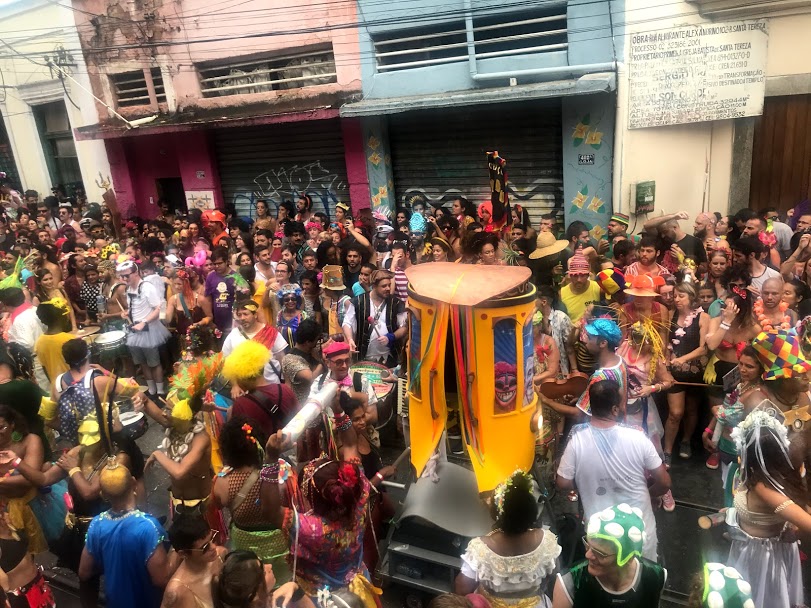 So the party had begun, I eventually integrated myself into a group of other solo travelling ladies and the friendship started. It was easy to feel as though we'd known each other for ages- especially after a few Caipirinhas. Hitting the clubs was a great ice-breaker for the group, and the walk there was my first opportunity to see the madness that I would later grow to love.

Street parties, known as Blocos, pop up all over the city at any time of day or night, some are huge organised events whilst others just happen. Staying in Lapa, the bar and club centre of the city, we had no shortage of places to dance and watch how the locals party. I couldn't believe how the WHOLE city was in the streets, businesses closed, roads blocked. Every person was in skimpy fancy dress, no matter their shape, size, colour, gender, sexuality, or age. It was definitely the only time in my life that I have felt more comfortable in a bright pink Barbie bikini than I did in my shorts and tee!

The next day we were out by 8am to visit our first bloco. I was a bit miffed at the prospect of getting up early to go to a party, but now I'd recommend to anyone visiting to get to your bloco as early as you can. This particular party was in the area of Santa Teresa, and already the streets were thick with people and colour, many partiers still going from the night before. We could hear the samba band playing at quite a distance, but never could I see them through the grooving, glittered bodies. We soaked up the music and the atmosphere, hugging and dancing with locals and strangers who became your best friend in those moments, as we followed the band down the street. We'd be bopping on the spot for a while at times, trying to squeeze and snake through the crowd, but little by little we all popped out at the end of the crowd and made our way back to the hostel.

Of course, I took some time to see the sights, too. I was never able to visit Copacabana or Ipanema beaches, but Sugarloaf Mountain and Christ the Redeemer offered spectacular views over the whole city, and we were able to pick out landmarks from there. I even saw my first bit of wildlife, a little marmoset perched on the wall looking more than happy for people to take its photo. I also learnt a bit about how people in Rio live, from the centre's luxuries to the flavelas (slums) dotted around the state. Seeing the tall structures made of concrete and corrugated iron littered around was a bit of a culture shock for me, and some flavelas on the outskirts of the city stretched further than you can see. Of course, we also paid a visit to the centre of Carnaval, the Sambadrome parade. What an incredible spectacle of colour, creativity, and energy!

My time in Rio was over as quickly as it had begun, and I was on a bus to Paraty. This was the only part of my trip where I was totally alone with no group to meet me at the other end, but I was feeling good after my first experiences. I arrived at my hostel El Jardin, and was kindly greeted by the staff, Jaquin the kitten (I would come to meet all 6 cats during my stay), and Mora the dog. I had planned to spend my time here relaxing before going on to Ecuador, but the weather rarely lent itself to poolside lounging, so time for plan B. Some anxiety arose when I took my bag up to the large communal bedroom and I realised I was the only English speaker, we truly take English for granted here in Europe. I later learnt that most of the guests were Brazilians coming into the town to celebrate Carnaval, so after a day the place was almost empty as the partying came to an end. After finding some dinner I came and sat in the communal outdoor space, and watched as Mora stared desperately at a girl about my age eating her takeaway. 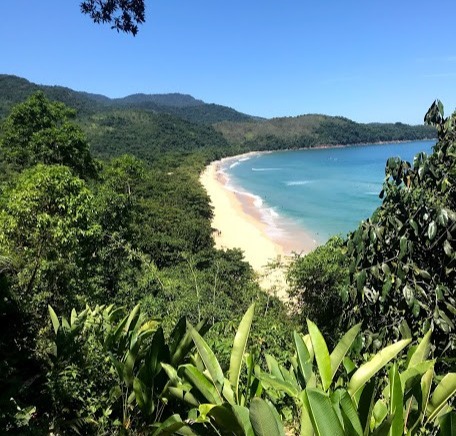 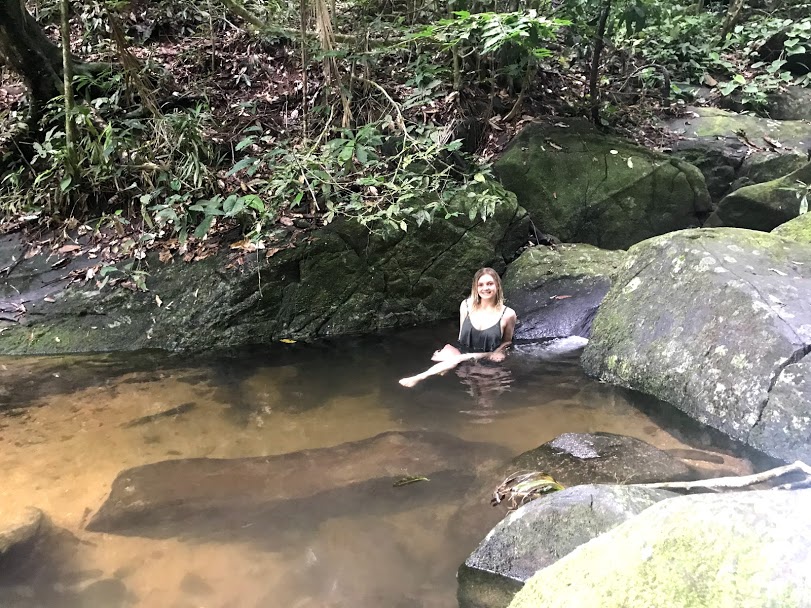 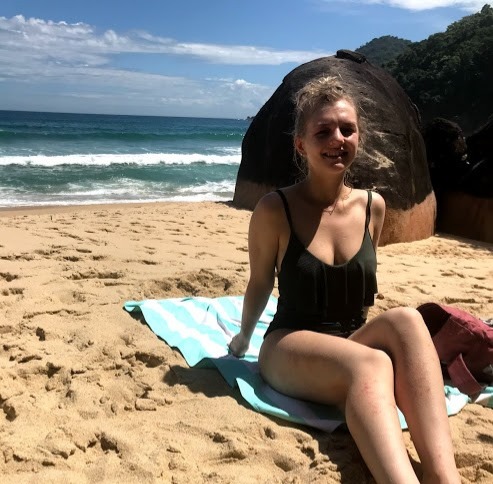 This was Natalia, who quickly became my friend and impromptu tour guide. She spoke little English but was keen to learn, and my Portuguese is non-existent, so I downloaded google translate and we had lengthy silent conversations. The following day we did see some sunshine, and she invited me to the beach with her fellow Brazilian friend, Everto, who she had also met travelling. I knew the beach was a bus ride and a bit of a long walk away, but that's no problem. What I didn't realise is that this walk was through a patch of the rainforest with ankle-deep mud! All part of the adventure. We bobbed in the sea and lay on the sand until hearing a large crack of thunder, prompting us to trudge back through the forest. The canopy kept us pretty dry, and we were able to clean off in a natural pool on our way back.

The next day was one of my favourites, and all came together with a bit of luck. I heard an English accent around the hotel and tracked it down to find Connor. He said he'd planned to visit Poco do Tarzan, a natural waterfall slide, so I tagged on. Our group quickly grew as more travellers were waiting at the bus stop to head to the same destination, and the 6 of us ended up spending all day together, and those of us left met up again later in the week. We'd been told that the locals will surf down the famous waterfall on their feet, and I didn't realise how impressive this was until I fell flat on my bum when walking across the rock. The slide was so fun, and this little lady slid down at (what felt like) quite a speed! We got a good few hours of decent weather and then headed off when it started to drizzle. Some of the days have blurred into one in my mind, but I believe we all met up again later in the night for some amazing veggie burgers, and an incredibly strong, but delicious, passionfruit Caipirinha.

The heavens opened after this and didn't show much sign of stopping, so the rest of my time in Paraty was spent doing not a lot. I wandered around the town and hung out with Natalia and Linda, from The Netherlands, and we visited some local landmarks, such as the church. The boys that were left came to our hostel for some drinks with some friends they had met, and we laughed and made far too much noise until around midnight when the owner very politely asked if our party could continue elsewhere (which, of course, it did).

When I left the safety of my group in Rio to come to Paraty on my own, and then arriving in a hostel where no one could speak my language, I was very apprehensive about spending 5 days there. However, once, I left, I felt exhilarated and so comfortable. It's a cliche thing to say, but travelling alone truly does give you a sense of freedom that I don't think you'd find anywhere else. What am I doing today? I don't know, maybe something cool. Who am I doing it with? Whoever will take me! If you keep your wits about you and have your head screwed on, anyone can do it perfectly safely. The power of human kindness and communication also never fails to amaze me, and other people's good-will is what kept me trucking along. I have made a friend for life with a girl who I can't speak the same language as. Connor and I only took the local bus to the falls because a Paraty resident heard our chat and told us the best way to get there. Us girls in Rio all came there to have a good time, and so we did it together. I also met people from all over the world and learnt a lot about other's different ways of living, even in countries that seem so similar to our own. At the end of week one, I was exhausted, ready to come home but yet not ready to leave my 'new way of life'. I did start to feel a bit homesick when I was in the airport to catch my flight to Quito, and a little emotional that I was waiting for a flight that would take me even further away from home. I'd call this a sensible place to end part 1, and I'll meet you in Ecuador.